In Memory of
Estelle
Montminy
1937 - 2020
Click above to light a memorial candle. 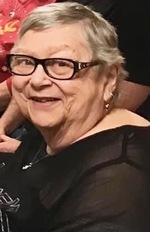 Surrounded by her children, Susan, Robert and Mark, Estelle passed away on
Thursday, November 12, 2020 at the age of 82.

Estelle Louise Marie Montminy, nee Chenier, was born in Mattawa, Ontario. She
was raised in Thorne, Ontario as the oldest of 16 siblings, leaving home at the
age of 13 to live and work with a couple who became known as her aunt and
uncle.

She married George Henri Montminy in 1955, a handsome man from
Montmagny, Quebec. They started their family in North Bay, Ontario, moved to
Kirkland Lake and then spent the rest of their lives in Englehart. They spent
many years at Round Lake having adventures and making lifelong friends.
Estelle was known as an amazing nana, a great cook and baker. She spent
many years caring for children, both her own and others. She shared her baking
and recipes with many and countless babies received handknit blankets. She will
be remembered by many families for her love and care, food, sweets, and
knitting creations.Donations in memory of Estelle can be made to the Heart and Stroke Foundation of Canada or the Englehart and District Hospital. Condolences, contributions and memorial candles may be left at www.mcdonaldfuneralhome.ca.


To send flowers to the family or plant a tree in memory of Estelle Montminy, please visit our Heartfelt Sympathies Store.