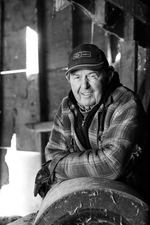 Tom Shoebottom, Krugerdorf, formerly of Denfield, ON
On March 23 the last “SOLD!” bellowed from the deepest part of his voice. His horses have turned to face the sunset and his dogs are resting at his feet. Tom’s big rough hands and his even bigger heart saw him teach, farm, drive truck, auctioneer and 5 other occupations at once it seems. His laughter and stories generate memories that overflow the page. From being the first Orange Protestant man to teach with a school full of Catholic nuns ( and they still liked him despite his flaws) to kidnapping MP Jack Riddle in a horse and buggy with life long friend Ken Liddell. You could see his love of life every time he slapped his knee and laughed in the middle of one of his tall tales.
He’d tell you first hand, with his pointer finger tipped your way so that you knew you were to be listening close, about orchestrating a “Penny Auction” in 1983 to save a struggling farmer. That triumph was something that raised his fist in the air and brought a glint to his eye.
The crazy, fun-filled and sometimes dangerous antics filled his life with stories that could be retold a thousand times. From planning the robbery of the last train through Denfield ( which would have been a success if only his horse could’ve run a bit faster) to racing chariots around a local circuit, in full costume - no one every really asked if undergarments were required under those medieval outfits.
He loved women and wild horses,I doubt there was another that could say they had a life-time ban from the Shillelagh in Lucan for running a team of horses right through the front door. He was a great story teller and you were always lucky to hear any one of those tales if you attended one of his auction sales. Half the time it wasn’t about the deals you could find but more about the entertainment value you’d get on a Saturday afternoon.
He loved his family and his community and he loved to make you smile. You’d shake your head when he’d say “Now listen to me, for a minute” or “Did I ever tell you about the time...”
He was always up for an adventure or party of any kind. The stories that would come out of it the day after were most definitely better then the actual event that was held.
But if you stood by his side at any one time you were guaranteed to learn something new that you’d never heard before. After living most of his adult life in Denfield Ontario, Tom finally answered the call to an adventure he always wanted. Pulling up stakes and moving north, Tom settled into the northern community of Krugerdorf as if he’d been there all his life. Which shouldn’t surprise anyone who knew him.
Tom, he always had a good time.
He’s moved on to sit for a while with St Peter at the pearly gates. He’s having a laugh, slapping his knee telling ole Pete a story about you and I .
May you be in heaven an hour before the devil knows you’re gone.
With his love of a good party in mind, a tale telling gathering will be held at a later date when all you poor buggers can come.
In lieu of flowers Tom’s wife, Cheryl and family, would be honoured to have you remember him with a donation to The Charlton Englehart Lions Club or Southgate Cemetery at the time of his gathering. Condolences, contributions and memorial candles may be left at www.mcdonaldfuneralhome.ca.


To send flowers to the family or plant a tree in memory of Tom Shoebottom, please visit our Heartfelt Sympathies Store.