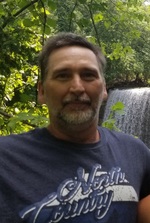 In loving memory of Mr. Christopher Martel who passed away suddenly due to a motor vehicle accident on Wednesday, June 30, 2021 at the age of 49.

Chris was born in Sudbury on October 16, 1971 to Christopher Martel and Claire Henry. Chris grew up in Hanmer and worked as a carpenter Construction worker. He worked in the Sudbury area until 2017, until he moved up to Englehart with his partner Tanya Reid, where they had a small hobby farm. Chris also worked as a truck driver for DMYT Group Inc. Chris's favourite pass time was spending time outdoors and spending time with his many friends and family members.

He is survived by his partner Tanya Reid, his father Christopher Martel (Mary), his children Samantha Fudge (Justin) & Sabrina Fudge (Andrew) and his 4 Step children Joey, Katy, Vicky & Pheby. He will be sadly missed by his 3 grandchildren Carter, Drayden & Roman; his sister Christine Hadlow (Carl) and his brothers Michel, Pierre (Della), Danny (Lisa) and Dennis (Kathy). Chris is also survived by his nieces and nephews Graham, Johnathon, Chelsea, Jennifer, Shawn, Miranda, Evan, Zachary and by his Best friend of over 40 plus years Pat Beaudry.

The family of the late Mr. Christopher Martel will be having a "Celebration of life" at a later date. In memory contributions to the charity of your choice will be greatly appreciated. Condolences, contributions and memorial candles may be left at www.mcdonaldfuneralhome.ca.


To send flowers to the family or plant a tree in memory of Christopher " Chris " Martel, please visit our Heartfelt Sympathies Store.